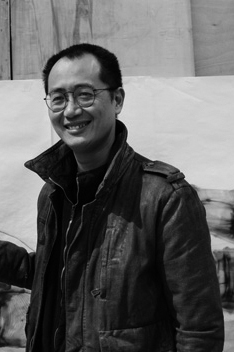 He lives in Beijing as a full time artist, as well as an art critic and curator.

In the middle of 1990s Qiu also wrote a lot about Chinese conceptual art and performance art.

In 1996, Qiu Zhijie was the co-organizer the first video art exhibition Phenomena & image in the China Academy of Fine Arts in Hangzhou, he also edited two books which include almost all the important documents in the world wide video art history, so he became one of the most important propellent in the field of new medial art in China. In 1999, Qiu curated Post-sense, Sensibility, Alien Bodies & Delusion in the basement of a resident building in Beijing. It showed the radical experimental works of the young generation artist which used the human flesh as the artistic meterial, bringing a great disputed in the art circle.From then on Qiu was regarded as the leader and prolocutor of the young generation artist. In 2001, Qiu was the one of chief director of the important art magazine NEXTWAVE , then in 2002, he become the co-curator of the Long march project.

articles
Interviews / The cartographer of humanity
May 11, 2016

Qiu Zhijie is one of the main Chinese figure of the world art scene, known for its large maps that illustrate the roots of our cultures. We have met him to talk about his art and his idea of our world.