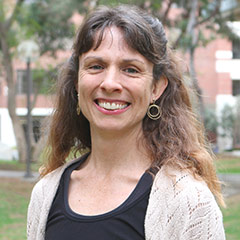 Joanna Demers is associate professor and chair of Musicology at the Thornton School of Music – University of Southern California. She received a Ph.D in Musicology (Princeton, 2002) and a DMA in contemporary flute performance (UC San Diego, 2002). Her research and teaching interests include popular and experimental music since 1945, philosophy, aesthetics, and electronica.

She has published three books: Listening Through the Noise: the Aesthetics of Experimental Electronic Music (Oxford, 2010), Steal This Music: How Intellectual Property Law Affects Musical Creativity (Georgia, 2006), and Drone and Apocalypse. An exhibit catalogue for the end of the world (Zero Books, 2015). Another one is forthcoming: Musical Fictions: Conditions for the Possibility of Musical Thought.  Her articles have appeared in Organised Sound, Journal of Popular Music Studies, Current Musicology, and Popular Music.  Her essays have been published in The Oxford Handbook of Sound and Image in Digital Media, Tomorrow Is the Question: New Directions in Experimental Music Studies, and Modernism and Copyright, as well as in Oxford’s Encyclopedia of Aesthetics. She has received grants and support from the American Association for University Women, the DAAD, and the Joseph Kerman Fund of the American Musicological Society.

The sound of the end of the world: A brief guide to drone music.